Hip hop is an integral part of Nigerian youth culture. The urban music phenomenon born in the late 70’s in the United States has long been adopted and embraced by many young Nigerians irrespective of religion or social status. Nigerian rap is not exotic, it is the driving force in the current Nigerian pop music industry.

With a potential listenership of 40 million people and a market that is yet to be hit by declining CD sales many young Nigerians are tempted to try their luck with witty rhymes and banging beats. The availability of cheap computers and music editing software has made producing and recording songs easier than ever before. Music and music video production standards have improved dramatically over the past decade. Today Nigerian radios stations and clubs play an average of 70-80 % local music due to the high demand from an audience that can easily identify with rappers who speak and act like them.

Thanks to international TV outlets like MTV & B.E.T. Nigerian rappers are gaining acceptance and recognition beyond the shores of Africa. Like other genres of music, rap has also found its way into the religious spheres notably amongst Christians via Gospel Rap or Christian Rap (a Christian version of rap that tries to use hip hop for the purpose of evangelization). There is also an emerging trend amongst Muslim rappers to explicitly refer to their faith although this is yet to be seen as a movement in comparison to Christian rap.
With the growing number of religious crises, clashes and deaths in Nigeria, it is about time to bring young Christian and Muslim rappers together to explore how to tackle religious fundamentalism in Africa’s most populous nation. The hip hop workshop and the recording session aim to bridge the destructive gap of intolerance through creativity, rhymes and skills. 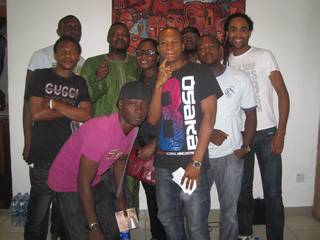