Boasting some 10 million inhabitants, Lagos lies ahead of Kinshasa and behind Cairo on the list of Africa’s most populous cities. Lagos is a challenge. Although Nigeria, whose capital it was before the seat of government was relocated to Abuja in 1991, has the potential to be a rich country, it still draws development aid from the North. And little benefit accrues to the population from the 1.8 million barrels of crude oil being produced daily from the oil fields of the Niger Delta: one in two Nigerians live beneath the poverty line, and unemployment in Lagos is at eighty percent.

Under these conditions the residents of the city have been compelled to improvise. Like a wall-to-wall carpet, the micro-economy of the itinerant vendors has spread across the entire city. Trading is not only conducted at the roadsides, but in the midst of the bustling traffic. With hardly any supermarkets or other institutionalized infrastructures of consumption, everyday consumer goods change hands in the choking smog of the congested traffic. Lagos has long since become a paradigm of the African “slum city”—and thus a favorite object of research for urban theorists and architects. The Dutch architect Rem Koolhaas, for example, often visited the city in the 1990s to study the unchecked growth of urban self-organization and its implications for urban planning. In doing so, he was subscribing to the widespread notion that planners and engineers from the so-called First World can gain useful insights from examining the situation in the South. The fact that this perspective carries certain colonialist overtones has already seen opprobrium heaped on Rem Koolhaas and accusations of exploitation: whilst Koolhaas is traveling through Lagos in his Prada shoes, this fashion label has yet to launch one single branch throughout the entire African continent.

Whatever the case, little can be gleaned from the approach taken by this city’s major investors who are endeavoring to confront the prevailing chaos with well-known methods. Their strategy is exclusion: modeled on the example of Dubai, an isolated free-trade zone is currently being built on the peninsular of Lekki, billed, to quote the marketing slogan, as “Lagos, City of Excellence.” A similar project currently under construction is “Eko Atlantic City,” a new city district, being erected on land reclaimed from the sea. According to the developers, this project has embraced the ecologically laudable objective of counteracting the increasing erosion of the coastal strip. In future, some 400,000 new resident-settlers will enjoy the benefits of modern water-supply and refuse-collection systems, an autonomous electricity network, and rigorous security standards. Although religion is omnipresent in Lagos, it has to date remained relatively immune from the religious war overshadowing the rest of the country. The confrontation between the Muslims in the north and the overwhelmingly Christian south, which has claimed the lives of some 100,000 people between 1999 and 2004, has left Lagos virtually untouched. Here the adherents of the various religions, sometimes including the members of one family, mix together peacefully. Depending on which estimates one takes, the population across the country is equally divided among Christians and Muslims, apart from a small minority of followers of the ancient African religions. They, in turn, have influenced the two monotheistic religions, which have integrated animalist rituals into their ceremonies. Christians are in the majority in Lagos, with the Pentecostals representing the most active, and more recently, the largest faith community.

Nigeria’s most prominent Pentecostal church is the Redeemed Christian Church of God (RCCG). Founded in 1952 in Lagos by Enoch Adejare Abedoye, since the 1980s, it has rapidly expanded its range of activities. The RCCG operates some 2,000 parishes in Nigeria, is also engaged in many other African countries, and in Northern Europe and the United States. That it has devoted itself explicitly to a strategy of international missionizing, is what makes this movement so fascinating: an African church—and one founded in Africa to boot—is reversing the direction of colonial expansion and becoming increasingly influential in the formerly so-called First World.

Proving as flexibly organized as the individual street vendors, the RCCG has expanded a closely meshed network across Lagos. It is not dependent upon imposing edifices, but consecrates secular sites for its purposes: the church services are held in former stores, cinemas, or offices. As a result, the boundaries between sacred and secular space are becoming blurred in this city. Oriented around gospel singing, the services transport their participants into protracted states of ecstasy. During the Holy Ghost Service, which is held in Lagos on every first Friday of the month, the congregation celebrates from seven in the evening until three in the morning. It is estimated that several million people distributed across the city participate in this ceremony. The RCCG is constantly training new preachers and runs its own university in Lagos. Yet the city is merely the headquarters of a worldwide expansionist movement. For just like a global corporation, the church operates according to a modified franchise principle: religiously ensuring universal compliance with the practices and methodologies devised in Lagos, they send their missionaries out into the world to spread the gospel.

Prayers on a parking lot. At the Redemption Camp of the RCCG church in Lagos. Film: J. Wenkel/E. Ojesebholo 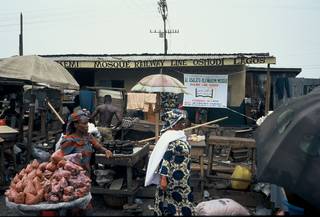