Beneath lies a sea of tightly packed houses competing for light, above a row of bombastic skyscrapers whose gleaming, smooth facades keep the chaos at bay. Languidly winding a path through the slums, like a stealthy python, is a commuter train. This is approximately the view of Mumbai from the air. “It is as if one city has been built on top of another,” the author Salman Rushdie once commented during an interview on the astonishing transformation of his native city. The Bombay of the 1950s and ’60s, where Rushdie was raised in a Muslim family, has virtually nothing in common with today’s vast metropolis of Mumbai. Mumbai is the capital of the state of Maharashtra, and home to some 15 million people of various ethnic and religious backgrounds, including Hindus, Parsis, Christians, Jains, and Muslims. From the mid- twentieth century onwards, growing numbers of migrants from north and south India have settled in Bombay, the majority of them employed in the service sector. For every 1,000 residents there are 120 square meters of green land available in this megacity. There are two stock exchanges and the financial elite reside in close proximity to Dharavi, Asia’s biggest slum. Economic growth lies at eight percent annually. The annual film production in the studios of Bollywood is higher than that of Hollywood and Europe combined. Showcasing and reflecting society’s urban fantasies, desires, and anxieties, it is said that India’s commercial cinema is Mumbai’s real city archive. What is undeniable is the enormous influence now being exercised by the local dream-machine industry on religious mass gatherings. Ganesh, the elephant-headed deity of the merchants, is celebrated each year, with ever greater recourse to special effects.

Before Mumbai, this sprawling behemoth of people, finance, and modernity, was able to rise from the Arabian Sea, seven islands first had to converge. Land reclamation measures enabled Bombay, Mahim, Mazagaon, Parel, Worli, Colaba, and Old Woman’s Island to gradually join together and still shape the geography of the city today. A center of world trade for many centuries, its port now ranks as among the largest in South Asia. It was here in the sixteenth century at the “Gateway to India” that the Portuguese and later the British colonial powers began exploiting the sub-continent. By virtue of its favorable location, Bombay developed in the mid-nineteenth century into a center of the textile and cotton industry. As migrants flowed into the booming industrial metropolis, the “mill village” of Girangaon emerged, with its factories and workers’ residential quarters, the chawls. Due to the overcrowded living conditions, people spent many of their waking hours out in the streets where a vibrant local workers’ culture, with its own festivals, became established. During the industrial heyday, 130 cotton factories were in operation here.

In 1947 British India was granted Independence and partitioned into India and Pakistan. Jawaharlal Nehru, the first Prime Minister, campaigned for a democratic and secular nation-state and for a more equitable redistribution of resources. But this promise of modernity was never honored. In every state, the Congress Party was dominated by the regional castes of the clan elites. Bombay’s deindustrialization began around 1980 with the decline and relocation of the textile sector, which at the time employed some 200,000 to 300,000 workers. Led by the physician Dr. Dutta Samant, the trade union called a massive strike among textile workers which lasted over a year. Its eventual failure sounded the death knell for an entire industrial sector. As the factories closed, a vast industrial wasteland, measuring several square kilometers, came into being at the heart of the city. This upheaval carried far-reaching implications for the economic structure of Mumbai and thus India. The municipal administration was also unable to cope with the resultant social and spatial problems as virtually no other city worldwide had been so dependent upon one single industrial sector. The financial sector expanded into Girangaon, which today forms part of central Mumbai. Following the demolition of a substantial number of plants and the sale and development of the vacant land with skyscrapers, luxury shopping malls, and discos, some of the remaining buildings have now been listed as protected monuments and turned into industrial museums.

With the demise of the manufacturing industry and the expansion of the informal sector, the once powerful trades unions lost influence. During this period, Bombay witnessed a rise in Hindu nationalism, spearheaded by the Shiv Sena organization, which to the present day has enjoyed the support mainly of the middle classes, despite its image as the party of slum dwellers. Having been in power virtually uninterrupted since 1985, Shiv Sena is both formally a political party and also a militant, socially-religious movement pursuing anti-Muslim policies. The renaming of Bombay to Mumbai in 1995 can be also traced back to the fundamentalist agenda of Shiv Sena and its similarly right-wing coalition partner, the Bharatiya Janata Party. Following the violent riots against Muslims in 1992/’93, the residential quarters became increasingly segregated. Shiv Sena supports local temples and even entire festivals across many districts of Bombay. Where violence, spatial fragmentation, and social polarization have generated transcendental homelessness, a boom in religious faith communities has been observed.


A Ram Leela performance at the Azad Maidan in Mumbai. Video: S. Sharma 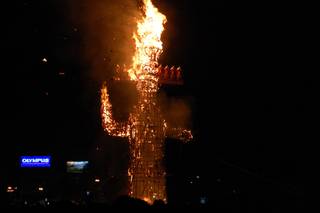