Migration in the City Through the Lens of Ram Leela

Ram Leela: A nine-day performance depicting the journey of Lord Ram to his victory over evil on the tenth day, when he defeats Ravana, the epitome of all evil, in battle. The Ram Leela is a festival in which the Hindu epic Ramayana is performed over nine nights. On the tenth night, there is a battle of Good over Evil, which ends with the effigy of Ravana being burnt. These performances are most popular in the Northern states of Uttar Pradesh and Bihar. Ram Leela is traditionally performed only by men. One in every four migrants in Mumbai comes from Uttar Pradesh/Bihar. Mapping the Ram Leela celebrations in the city is a way of charting out the story of the migrant in the city.


The Actors Prepare
Location: A slum close to the Mumbai International Airport

The actors get ready for their performance. A community organization has put together the Ram Leela with substantial financial support from a political party. A school teacher from the community directs the production. Laxman, Lord Rama’s brother, is played by an air conditioner repairman, Ravana is played by a telephone department employee, the narrator is played by a taxi driver. All of them live in the slum. Since all of them worked long hours, I wondered how they made time for daily rehearsals. They said that they met every night to brush up on their lines. They did not need to rehearse since this is a text they have known intimately since they were kids. They know the characters. Rama is measured and calm. Laxman is fiery and passionate. Sita is demure and graceful. Ravana is powerful and villainous. It was very dramatic to see their transformation into charismatic, larger-than-life archetypes. The performance space was transformed as well - from an empty playground surrounded by densely packed huts to a congregation of devotees enthralled by the journey of their Lord Rama.

Azad Maidan is a large, open public space opposite the city’s main railway station and adjoining the main office of the Greater Mumbai Municipality. This space is used for political protests, large public meetings, religious celebrations, and for cricket practice and matches of local teams. Here, the Ram Leela is organized by the North Indian Traders’ Association, located in the busy market close by.  They claim to be amongst the first to hire a professional Ram Leela troupe from Uttar Pradesh to perform in Mumbai. Though this is the middle of Mumbai’s bustling business district, it empties out by evening. The sets and costumes were lavish, but the audience was unengaged.

Sewri was a throbbing industrial area that drove the city’s economy until the city’s shift to an economy anchored in the service sector. It aspires to become a global city with a glass and chrome business district and swanky high-rise gated communities. The landscape is ringed by these new constructions, dotted with dark structures that used to be factories and mills. The first organizers of the Ram Leela in the city were workers from this area. The tradition continues even though the area’s workers have been dislocated and pushed towards the fringes of the city. 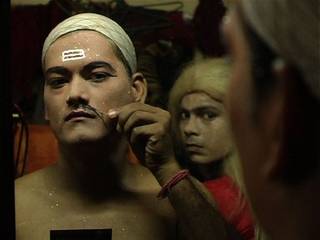 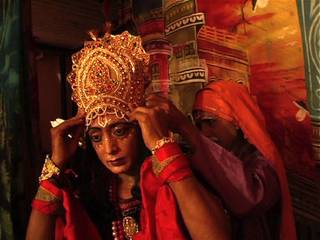