Dorothea Nold and Magdalena Kallenberger met in Berlin more than 10 years ago and happened to meet each other again at different spots around the world (like in Berlin Kreuzberg, the central station in Stuttgart, next to the terracotta warriors in Xi’An China, in Teheran, Weimar, Paris, Istanbul, Kairo, Kabul or the Schweinebucht in Bad Säckingen). Probably at one of these places the idea started growing to collaborate in a project one day.

2009 in Teheran the plan became more concrete but then Dorothea got kicked out of the country and went to Afghanistan. Two weeks later Magdalena had to escape with her sound and video footage due to the upcoming protests via train to Istanbul. In 2011 they met again in Berlin to realize the global prayers Case Study Berlin.

Born in 1981, Dorothea Nold is a visual artist with background in sculpture and installation. She received a Master of Fine Arts from the École nationale supérieure des beaux-arts de Paris. Her artistic work is focused on the connection between social conventions, traditions, architecture and urbanism in different social and cultural contexts. Since 2002, she has made repeated travels to Central Asia and has lived in Turkey, Iran, Afghanistan and China for several month. Her interest for video-documentary works started mainly in Kabul, where she was invited to teach installation and sculptural techniques. She is particularly interested in collaborative arts projects and participated in artist residencies in Armenia, China and Mali. Dorothea Nold lives and works in Istanbul.

Magdalena Kallenberger, born in the south of Germany, studied in Furtwangen, Würzburg, Rotterdam and Berlin, where she graduated with a diploma and was awarded with a Meisterschülerdegree in Klasse Medienkunst at the University of the Arts. She was involved in several interdisciplinary project collaborations working with different visual artists, musicians, composers and dancers in the field of intermedia concerts and performances. In 2008 she won the 1. prize for her remarkable musicvideo "Grand Pas de Deux" at the 10. Backup Shortfilm- and Videofestival in Weimar. As a participant of the artistic reseach project „Reloading Images: Tehran-Berlin / Work in Progress 2007“ she got interested in Iran and the Middle East. Working with photography and video, image, text and sound her recent research projects focus on different aspects of shifting identities, migration and global nomadism. In numerous interviews she collected individual experiences and memories of actual political events and changes. Ongoing world history, social, cultural and historical changes versus individual daily life experience in Tehran were her field of examination 2007-2010. Awarded with several grants by the DAAD German Academic Council and a one year grant by the Berliner Senat (NaFöG) she spent two years travelling and living abroad, mostly in and around Tehran/Iran.
Since 2010, Magdalena Kallenberger is a faculty member at the Department of Media Design at the German University in Cairo. 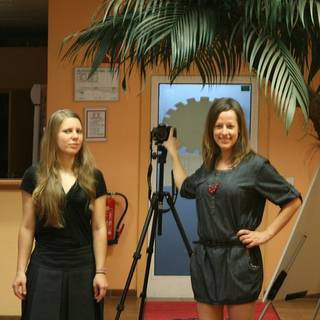