Surabhi Sharma is a filmmaker. She studied film direction at the Film and Television Institute of India (FTII), Pune, and made her first film in 2001. She completed a BA in Anthropology and Psychology from St. Xavier’s College, Mumbai University. Her films have been screened and awarded at various international and national festivals. She has also directed and scripted fiction films and Science Programming for children. Beyond this Surabhi Sharma is a guest lecturer at the National Institute of Design and at the Centre for Media and Cultural Studies, Tata Institute of Social Science.

Filmography:
Jari Mari: Of Cloth and Other Stories is a feature length documentary film that seeks to understand the process of ‘informalisation’ of Mumbai’s work force, and focuses on the lives and work of women in the extensive but largely invisible garment industry. The film won awards at Film South Asia, Nepal; Karachi Film Festival, Pakistan; and The Festival of Three Continents, Argentina. It was screened at the New Asian Currents, Yamagata and was a part of the Travelling Film South Asia package.
Aamakaar (The Turtle people) (2003) is the story of a fishing village community’s struggle to retain control over its local natural resources. The film was awarded the first Ramsar- Medwet Award at Eco-Cinema, Greece and was awarded at the Indian Documentary Producer’s Association.
Above the Din of Sewing Machines (2004) portrays the lives of women in Bangalore’s garment industry. This film was funded by Oxfam-India and was used extensively by European and American campaigns against sweatshop production of branded garments.
Jahaji Music: India in the Caribbean (2007). This was the opening film at SIGNS, Kerala. It was also screened at the Singapore International Film Festival. This film has been screened extensively at American, Canadian and European Universities.
Pregnancy, Prescriptions and Protocol. (2008) documents a remarkable community health programme run by a hospital in a tribal area in south Gujarat, India.
Notes from a Global City (2009) tracks the work of a precarious but significant trade union set up by garment workers in Bangalore city. The film is being used extensively by European and American campaigns against sweatshop production of branded garments.
Bidesia in Bambai (Work in progress). 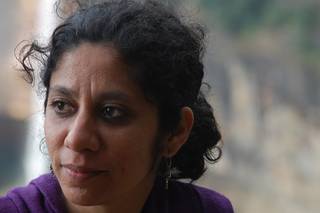