Extending across only a few hundred square kilometers and boasting some 2 million inhabitants, Beirut is a relatively small capital city, compact and densely populated. Whereas Berlin counts 4,000 residents to every square kilometer, in Beirut, the figure is 20,000. The Lebanese Civil War, which raged here from 1975 to 1990, has left its indelible mark on the former “Paris of the Middle East.” The fact that this conflict lasted for so long, and pitted against each other virtually all the key players from across the Middle East during the second half of the twentieth century, elevated Beirut to a symbol for the entire region. Nowhere else did the front lines between Arab nationalists, militant Islamists, Sunnis and Shiites, Christian militias and the outside Western intervention cut across denser terrain.

This once cosmopolitan city, renowned for the peaceful and natural coexistence of its diverse cultures and religions, appeared to be irreparably destroyed. By the end of the civil war it was impossible to determine who was fighting whom and with what objectives—as the hatred and enmity had long since begun feeding on itself. The laboratory character which this concentrated violence conferred upon the city of Beirut has perhaps never been so appositely described as in the literary speculation by the British author J. G. Ballard. His short story “War Fever” published in 1989, the penultimate year of the war, observes the situation through the prism of the future. In Ballard’s phantasmagoria, Beirut is transformed into an infernal Disney World: designed as a standard metropolis by its urban planners (replete with McDonalds, Hilton Hotel, Holiday Inn, sport stadium, shopping malls, etc.), it becomes the stage for mercenaries, militias, and religious fanatics to massacre without rhyme nor reason or inhibition. Yet, what the warring parties are unaware of is that Beirut is a kind of “Truman Show,” an entirely artificial world created by the United Nations as an experimental laboratory for conducting scientific research.

Hermetically isolated from the outside world, the war is documented by cameras positioned throughout the city, and then meticulously analyzed. Beirut is a self-contained war zone. As the rest of the world has now been completely pacified, the United Nations passes a resolution—based on the latest virological findings—calling for the development of an antidote: for only through a deeper understanding of the depths of human depravity in

war situations, can the fragile world peace be protected or “immunized” in future. Hence— according to Ballard at least—the need for the “managed” state of emergency in Beirut. Eventually the civil war ended, and even though tensions rose markedly across the region in 2001, in the aftermath of 9/11, it has remained relatively peaceful in Beirut until the present day. The one exception was the Lebanese War in 2006, and the Israeli air attacks of February 14 of the same year. Many residents of the city were killed by bombs and rockets, and the airport and large sections of the transport network were temporarily crippled. Otherwise, the postwar history of Beirut has been shaped by reconstruction. Significantly, however, this reconstruction failed to restore the permeability prevailing in the city prior to 1975, and the once familiar sight of adherents of different religions all residing in the same streets, is now a thing of the past.

Although the Green Line, which during the war divided the eastern and western parts of the city to keep apart the various faith communities, has disappeared, it has been replaced by a more subtle form of segregation. Different social groups now remain strictly within their own neighborhoods. In addition, private investment has promoted the creation of numerous gated security zones: office complexes, exclusive residential estates, and shopping districts. Failures in urban-planning policies have largely prompted the loss of an urban public space, and Beirut has become a city without a center. The district of Hamra, a cosmopolitan haven of harmonious coexistence as far back as the 1960s and early ’70s, attracting both artists and intellectuals from across the Middle East, is today merely an exception to this rule. Yet within its own narrow confines, and isolated from the rest of the city, vestiges of this openness have been retained. Hezbollah also has its own district. The national headquarters of the party was once located in Haret Hreik which is why the Israelis concentrated their attacks on this area in 2006. Yet the issues relating to the form of the reconstruction of Haret Hreik, which was badly hit during the bombardment, and above all by whom it should be carried out, have subsequently proven to be highly contentious. The government claimed control of the reconstruction project in order to demonstrate to the world that Hezbollah had not become a state within a state. However, it failed in this endeavor. De facto Hezbollah launched a private development company called “Waad” (pledge), which in turn commissioned university lecturers, who had no affiliation to the party, with the rebuilding program. Hence the reconstruction of the destroyed buildings was based on their plans, which incidentally, were in total compliance with the city’s building codes.

That the attacks were targeted so specifically on Haret Hreik, despite the fact it would have made no strategic sense to bomb the Hamra district, for example, is explained by the unique topography of the city, which is both highly compact and yet fragmented into so many disparate parts. 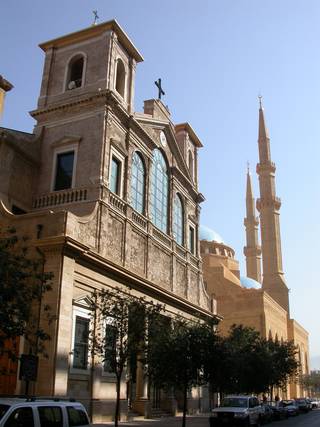