The third workshop of global prayers • redemption and liberation in the city took place in Greater Lagos and consisted of three parts: a workshop for people involved in the project that took place on the Lekki Pensinsula, a number of multi-day excursions through the metropolitan region, and a public presentation supported by the Goethe-Institut Lagos and the Heinrich-Böll-Stiftung.
The internal workshop gathered about 25 grant holders, associated researchers, artists and collaborators involved in the global prayers project. It consisted of presentations of interim findings of the participants’ scientific and artistic research and a discussion of the project’s central questions. One finding coming out of the discussion was that all participants had come to regard the following topics as important over the course of the first research phase: The City of Modernity, Borders and Zonings, Street Politics, Mobility and Movements, and The City as a Laboratory of Religion. The next few days were spent looking further into these topic areas in smaller teams. The results of the workshop, and the collaborative projects between research fellows that came out of it, showed once again what an important component of the overall project the workshops in the research locations are.
A number of excursions to numerous religious sites followed the workshop. At this places the participants discussed with academics, artists, activists, journalists and experts about the main questions of global prayers • redemption and liberation in the city.
The final part of the workshop consisted of a public presentation of the global prayers project, moderated by the literary scholar Sola Olorunyomi, at the Glendora bookstore/The JazzHole. Here, the global prayers team presented the project itself as well as work coming out of two workshops conducted under the project’s umbrella: the documentary film workshop Workshop of God, conducted by Jens Wenkel, in which young filmmakers from different religious backgrounds created works on the topic of religion, and the hip-hop workshop Rhythm, Beats and Skills, conducted by Adé Bantu. 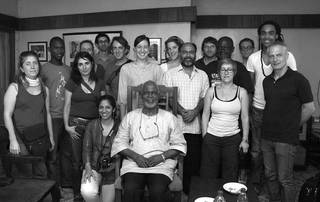 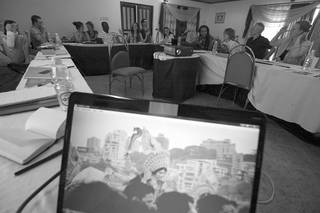 A workshop session in Lagos. Photo: A. Danusiri