The Global Prayers Congress - Faith in the City

The city is not an a-religious space. This is demonstrated by all of the insights gained through global prayers—redemption and liberation in the city. Rather, it is in the global metropolises that new religious movements are finding the fertile cultural, political, and economic ground in which to take root. In the dynamic life of the city, religion, too, is in constant motion. New religious groups are subverting the traditional order and hierarchies of urban society. Powerful religious economies and a new kind of religious mainstream are establishing themselves in the heart of the city.

In its concluding event, global prayers will set its analyses within current theoretical and methodological approaches aimed at the post-coloniali- zation and decentering of both urban studies and the arts. In discus- sions, presentations, film as well as spatial installations, academics and artists will explore current manifestations of the religious in the global city.

Under the catchphrase “decolonizing research,” they will illuminate pitfalls, methods, and theoretical and practical implications of academic and artistic research. A special focus will be placed on the performance of artistic research.

The exhibition speaking in tongues by the Dutch artist Aernout Mik will open the global prayers congress. 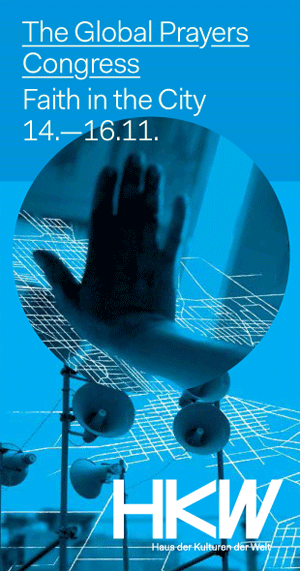