The Global Prayers Congress - Faith in the City

Opening of the exhibition by the Dutch artist Aernout Mik with Lars Eidinger and other participants.

Aernout Mik’s multichannel video installation interweaves documentary footage of Pentecostal churches in Lagos, Belo Horizonte, and Rio de Janeiro with enactments of secular gatherings. The work sets meetings of religious communities opposite those of the business world, which for their part have incorporated spiritual rites and features. Out of diverse source material arises a landscape of the transitions between the religious and the worldly. The starring role is played by the Haus der Kulturen der Welt, more than 200 actors, and Lars Eidinger and Burghart Klaußner. 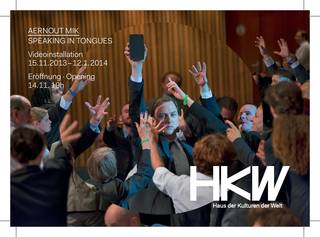 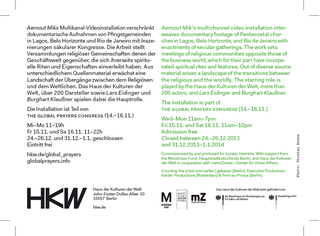 Aernout Mik: Speaking in Tongues. Exhibition at the HKW Berlin, produced on behalf of Global Prayers.