The Cases of al-Omari and al-Amin Mosques

In October 2010, I was reviewing press articles related to the inauguration of the Muhammad al-Amin mosque in Beirut when I was struck by a picture in Al-Hayat newspaper showing the Russian president Vladimir Putin in front of a mosque that looked very similar to the one being inaugurated in Beirut. Next to him stood a man that had little resemblance with the main figure of the Beirut ceremony, Saad Hariri, the son of the late prime minister Rafic Hariri, who financed the construction of the al-Amin mosque and who was assassinated three years earlier. Looking closer, I discovered that two mosques were actually inaugurated on the 17th of October 2008, the first in Beirut and the second in Grozny, the capital of the Chechen Republic.

After further research, I discovered that the histories of the two mosques meet at different points: a country located in the heart of an international conflict zone, a demolished city reconstructed after a devastating war and seeking to forget the forces that destroyed it, an assassinated politician to which the mosque is dedicated, and a son that decided to carry out the political career of his father. The man standing next to Putin was Ramzan Kadyrov, the son of the former Chechen president Akhmad Kadyrov, who was assassinated in 2004.

As for the striking resemblance between the two monuments, it is due to a common architectural model. The architects of both mosques had stated that they were inspired in their design by the Sultan Ahmed mosque in Istanbul, also known as the Blue Mosque. Though the al-Amin mosque can host half of the believers that the Akhmad Kadyrov mosque can host, the two mosques have an exceptional size: the Muhammad al-Amin mosque is said to be the biggest in the Near-East, and the Akhmad Kadyrov mosque the biggest in Europe. Their minarets, like those of the Blue Mosque, peak at around 63 meters, 63 being the age of the Prophet when he died. Both mosques are also of an exceptional scale in their urban environment, a scale that has little to do with the necessities of their function. Indeed in both cities, there was no urgent need to build such monuments, the existing mosques being largely sufficient to accommodate the believers.

This strange coincidence led me to a series of questions about the ways in which places of worship are being conceived – and perceived – in Lebanon in the postwar period. The most obvious ones were: What are the historical and geographical justifications for the use of an Ottoman mosque that was built four hundred years earlier as a reference to Sunni religious architecture in Lebanon? Is it the perpetuation of a tradition, a mere recognition of the artistic achievements of a past civilization considered as superior, a generic Sunni identity marker, or a sign of a general crisis of meaning in religious architecture? What is the role of the different urban actors – the religious authorities, the government, the political parties, the investors, and the architects – in defining the image that the religious architecture is conveying? 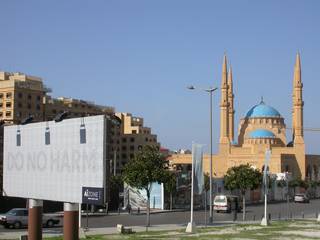 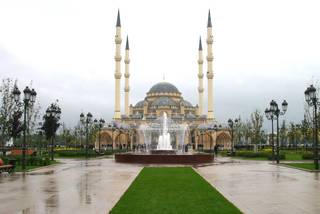 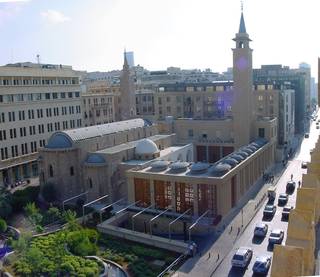 Al-Omari mosque and the landscaped garden separating it from the Assaf mosque. Photo: Y. Haidar