Facilitated by the ever-increasing mobility of people, objects and media, new urban religious communities are often interlinked  on a global scale. In the form of diasporic communities, they de- and reterritorialize themselves in globally linked metropolises. The cluster Networks analyzes the relationship between global networks and local manifestations of these religious communities.

For instance, migration sociologist Gerda Heck conducts a comparative analysis of the meaning of Born-Again Churches for Congolese diasporic communities in Rio de Janeiro, Istanbul and Berlin. These cities have in common that the appearance of Congolese communities is a relatively recent phenomenon. Gerda Heck analyzes how the local and transnational spatial practices and networks of these Congolese migrant communities are closely linked to Pentecostal churches, and how these churches adapt and transform their practices in the context of their various urban constellations. The ethnomusicologist Thomas Burkhalter examines global networks of religious music productions on the examples of Cairo, Beirut and Damascus. Transnational networking through new forms of media and their significant role for the ascendance of religious urban lifestyles are also part of the research projects of Amanda Dias and Aryo Danusiri with their studies on new religious communities in Rio de Janeiro and Jakarta. 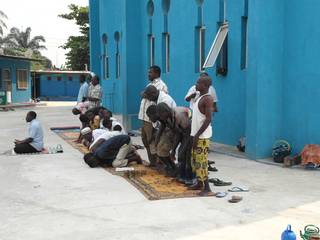