The European left tends to consider religion as a phenomenon of anti-libertarianism and fundamentalism. In Latin America, however, social resistance and guerilla movements are not conceivable without a theology of liberation. Until today, the experience of the "liberation priests" is present in this region. Additionally, a big part of the "urban poor" seem to expect redemption rather from the new churches and cults than from political ideologies.

In which way do religious movements affect the lives of people? Do they have an authoritarian or a liberating, a reactionary or an emancipatory impact? The research conducted by global prayers suggests that there are no clear answers to this question. The third globalPrayers.saloon is going to approach this subject through a discussion on the relationship between religion and politics, belief and revolt. The saloon is organized by metroZones | Center for Urban Affairs and will take place at the NGBK on November 4 at 8pm. 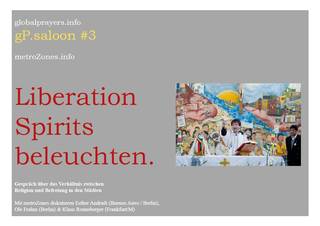