Presentation and discussion of the exhibition project Afropolis with the curators, Kerstin Pinther and Christian Hanussek. This public workshop - the first put on by the working group the Urban Cultures of Global Prayers, which is also organizing the eponymous exhibition opening at the NGBK in November - will showcase the extraordinary project Afropolis (Nairobi, Cologne, Bayreuth).

The project is broad in scope, encompassing an exhibition, a catalogue and numerous events, and takes a descriptive look at Cairo, Lagos, Nairobi, Kinshasa and Johannesburg. Its core curators, Kerstin Pinther, Larissa Förster and Christian Hanussek, explore the subject through film and photography, comics and pictorial novels, literature, music and visual arts as well as through urban studies and ethnography. Their aim is to disrupt the commonly held image of Africa as a rural continent. It quickly becomes clear that these five metropolises can only serve as examples. What is presented here is not an overview but snippets - city fragments displayed on tables, walls and boxes. In assembling the exhibition, the team has also drawn on investigations by autonomous artists' initiatives.

The globalPrayers.Saloon #1 is divided into three parts: the genesis and development of the project, curatorial questions, and questions concerning the role of religious movements in the cities.

the Urban Cultures of Global Prayers is a project by the Neue Gesellschaft für Bildende Kunst. (The exhibition opened on Nov 11, 2011 at the NGBK Berlin and continued through January 8, 2012. It then transfered to the Camera Austria in Graz (January 27–March 31, 2012). 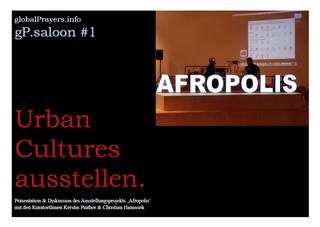